A Brief History of Everything by Ken Wilber 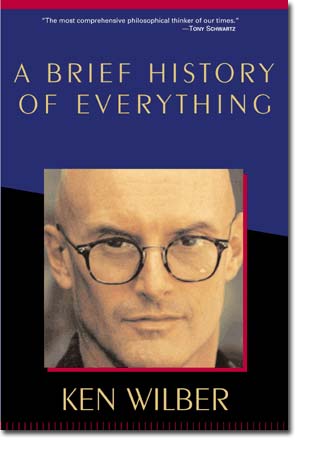 Wilber examines the course of evolution as the unfolding manifestation of Spirit, from matter to life to mind, including the higher stages of spiritual development where Spirit becomes conscious of itself. In each of these domains, there are recurring patterns, and by looking closely at them, we can learn much about the predicament of our world—and the direction we must take if "global transformation" is to become a reality. 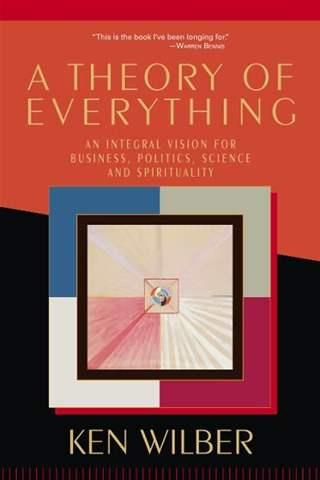 A review by Copthorne Macdonald that appeared in
Integralis: Journal of Integral Consciousness, Culture, and Science, Vol. 1, No. 0

A Theory of Everything:
An Integral Vision for Business, Politics, Science, and Spirituality
by Ken Wilber

If you have been following progress in theoretical physics, you know that a “theory of everything”—from which could be derived “every known particle and force in the cosmos”—has been the physicist’s holy grail for some years now.  Unfortunately, although such a theory would shed light on primary physical processes, it would do little to help us understand the complex milieu that developed out of those processes.  In his latest book, A Theory of Everything, Ken Wilber draws on several decades of insightful model building (his own models and those developed by others) to create a much more comprehensive “theory of everything.”  Wilber’s map of reality embraces the entire mental-physical “Kosmos,” not just the particle-physics aspect of it.  Wilber uses this wordKosmos because it meant for the Greeks “the patterned Whole of all existence, including the physical, emotional, mental, and spiritual realms.  Ultimate reality was not merely the cosmos, or the physical dimension, but the Kosmos, or the physical and emotional and mental and spiritual dimensions altogether.  Not just matter, lifeless and insentient, but the living Totality of matter, body, mind, soul, and spirit.”

A Theory of Everything should interest two very different groups of readers.  For those new to Wilber’s ideas, it provides a short (189 page) summary of his model of the Kosmos and his current thinking about it.  For those who have been following his work for years, it represents an expansion into new territory.  In this book, Wilber links his explanatory schemata to real-world problems and situations, and in doing so presents a convincing case that only an integral approach to personal and societal development will get humanity through the difficult times ahead.

The basic realities that Wilber addresses in his theory building are a primal ground-of-everything reality that he labels Spirit, and the progressive development of mental and physical expressions of Spirit.  Wilber has grouped Spirit’s manifestations into Interior-Individual I, Exterior-Individual IT, Exterior-Collective ITS, and Interior-Collective WE.  As shown in Figure 1, crossed X and Y axes provide the basic framework for presenting this.

The point where the two axes cross, the graph’s origin, also represents the origin of all development.  And progressive development in all quadrants can be pictured as a series of ever-larger concentric circles having the origin as their common center.  Wilber often represents different levels of this outward, developmental, evolutionary movement by using diagonal lines with tick marks on them.  An example is Figure 3-1, an illustration from this latest book.  It relates one aspect of inner development—a gradually-broadening sense of self—to Don Beck and Christopher Cowan’s color-coded “memes,” “waves,” or stages, of human development, and relates them to social and cultural development.

Figure :  Some Examples of the Four Quadrants in Humans

No single graphical expression is able to tell the entire story that Wilber wants to tell, but by using multiple graphs of this kind, and tailoring the details to suit the situation, he is able to help us understand a variety of Kosmic truths.  (For a more detailed look at this approach, Wilber recommends his books Integral Psychology and A Brief History of Everything.)

Beck and Cowan’s “Spiral Dynamics” model of human development is one of the core elements in A Theory of Everything.  Concerning it, Wilber says, “Memes (or stages) are not rigid levels but flowing waves, with much overlap and interweaving, resulting in a meshwork or dynamic spiral of consciousness unfolding.”  Wilber points out that the overall developmental spiral involves many developmental “streams, lines, or modules” and that “this added dimension gives a new richness to the developmental landscape.”  Among the most important of these lines and streams are the self-identity stream illustrated in Figure 3-1, and streams involving cognition, morals, and socio-emotional capacity.

Development in the various streams does not necessarily occur at the same rate.  A problem that Wilber callsBoomeritis occurs when a high level of development (green—sensitivity) in the cognitive and moral streams is accompanied by a low level of development (red—egocentricity and narcissism) in the self-identity stream.  Regarding the green stage or wave, he refers to Paul Ray’s study which estimates that there are some 45 million “Cultural Creatives” in the U.S.—people who resonate with integral values.  Wilber believes that the great majority of these people are at the green meme stage in tier 1 of the developmental process, not at the yellow “autonomous or integrated stage” in tier 2.  Research indicates that less that two percent of Americans are at tier 2, leading Wilber to say, “Almost anyway we slice the data, the ‘integral culture’ is not that integral.”  Yet Wilber goes on to say, “But it can be.  And that is the crucial point.  As the cultural creatives move into the second half of life, this is exactly the time that a further transformation of consciousness, from green into mature second-tier awareness, can most easily occur.”

Wilber identifies four factors that facilitate personal transformation: fulfillment, dissonance, insight, and opening.  “Fulfillment means that the individual has generally fulfilled the basic tasks of a given stage or wave.”  When this happens the person “is open to transformation” which is then facilitated by some sort of dissonance.  “The new wave is struggling to emerge, the old wave is struggling to hang on, and the individual feels torn, feels dissonance, feels pulled in several directions.”  Eventually, out of the dissonance comes “insight into the situation—insight into what one actually wants, and insight into what reality actually offers.  …  Finally, if all of those factors fall into place, then an opening to the next wave of consciousness—deeper, higher, wider, more encompassing—becomes possible.”

What those who are “already poised for an integral transformation—who already have tasted green to the full and are ready to move on, who already feel some sort of dissonance with their present state, who already are looking for something deeper, wider, more meaningful—can do to facilitate this ‘momentous leap,’” says Wilber, “can be summarized in two parts: we need an integral vision and we need an integral practice.  The integral vision helps provide us with insight, and thus helps us overcome dissonance and face toward our own deeper and wider opening.  And integral practice anchors all of those factors in a concrete manner, so that they do not remain merely abstract ideas and vague notions.”

Regarding integral practice, Wilber says, “Even if we possessed the perfect integral map of the Kosmos, a map that was completely all-inclusive and unerringly holistic, that map itself would not transform people.  We don’t just need a map; we need ways to change the mapmaker.”  He calls for a practice that exercises “physical, emotional, mental, and spiritual waves in self, culture, and nature.”  Regarding the self, he suggests such practices as “physical exercise (weightlifting, diet, jogging, yoga), emotional exercises (qi gong, counseling, psychotherapy), mental exercises (affirmation, visualization), and spiritual exercises (meditation, contemplative prayer).”  Moving toculture, he suggests getting involved in community service of various kinds, and making use of “mutual respectful dialogue” and relationships in general to further our own growth and the growth of others.  In the arena of nature, Wilber suggests getting involved in activities which respect nature such as recycling, environmental protection, and nature celebration—activities which both honor nature and promote our own capacity to care.  Regarding the importance of meditation, he says, “It has been shown…that meditation increases the percentage of the population who are at second tier from less than 2 percent to an astonishing 38 percent.”

While Wilber strongly recommends integral practice and inner development toward second tier consciousness, the larger goal is to maintain the health of the entire developmental spiral.  As Wilber notes, “Even if every society on earth were established fully at second tier, nonetheless every infant born in every society still has to start at level 1, at beige, at sensorimotor instincts and perceptions, and then must grow and evolve through purple, magic, red and blue myth, orange rationalism, green sensitivity and into yellow and turquoise second tier (on the way to transpersonal).  All of those waves have important tasks and functions; all of them are taken up and included in subsequent waves; none of them can be bypassed; and none of them can be demeaned without grave consequences to self and society.  The health of the entire spiral is the prime directive, not preferential treatment for any one level.”

Wilber also deals in this book with a variety of other issues.  In a chapter devoted to the relationship of science and religion he advocates a “broad science” which would not only investigate “the exterior, physical, sensorimotor world” but also “interior domains and their correlations with the exterior.”  At the same time, he also advocates a “transformative” or “deep” spirituality that “involves the direct investigation of the experiential evidence disclosed in the higher stages of conscious development.”  In a chapter entitled The Real World, Wilber deals with the application of integral theory in specific life arenas.  The chapter has sections on Integral Politics, Integral Governance, Integral Medicine, Integral Business, Integral Education, Consciousness Studies, Relational and Socially Engaged Spirituality, Integral Ecology, and Minorities Outreach.  In that chapter Wilber announces the formation of Integral Institute: a nonprofit organization dedicated to the development of comprehensive, systematic, encompassing and integral approaches to the world’s problems—a coordinating center and source of funding for integral research in the above (and other) fields.

A Theory of Everything does not disappoint.  Like Ken Wilber’s other works, it is a stimulating, informative, and inspiring read.